Everything that is happening in the wrestling world.
Post Reply
9 posts • Page 1 of 1

Longtime veteran Timothy Thatcher has signed a WWE contract and has reported to the Performance Center.

The deal was first reported Tuesday by Squared Circle Sirens and later confirmed by our Dave Meltzer.

Meltzer tweeted recently that Thatcher has turned down WWE on several occassions, and that William Regal has been a longtime fan of his work.

Thatcher, a month shy of 37, has wrestled around the world in his 15-year career including EVOLVE, PWG, wXw, Dragon Gate USA, PROGRESS, and plenty of others. He remains the longest reigning EVOLVE champion of all time and had recently been working with MLW, losing to Brian Pillman Jr. in the Opera Cup semifinals.

While not officially announced by the company as of this writing, the WWE BT Sport tweeted a gif of Thatcher while Walter tweeted a pic of Ringkampf, the Imperium precursor of which Thatcher was a member. The two wrestled at a December EVOLVE show with the NXT UK Champion coming out victorious.
Top

Hahaha! I literally only clicked the story to roast you and your WWE Superstar Avatar.

On tonight's episode of Backstage, it was announced that Killer Kross and Timothy Thatcher have signed with WWE. Thatcher signing with WWE and reporting to the Performance Center had already been confirmed earlier in the day.

WWE.com announced that Kross has also reported to the Performance Center.

Dave Meltzer reported on Kross' status in the most recent edition of the Wrestling Observer Newsletter:

"It looks like the deal with Kevin Kesar, 34 (Killer Kross) is finalized since word in the indie world is he’s not taking dates after the ones over the next few weeks are finalized. He also pulled out of a mid-February Australia tour which gives the indication he’s starting very soon. The indication we were given from when he first talked with Paul Levesque about coming in is that he’d be fast-tracked, whether that means NXT television immediately or main roster, that I don’t know, but was going to be given a major push. Kross has denied ever meeting with Levesque but that’s become the common theme for wrestlers to try and indicate they aren’t going to WWE. He did essentially a farewell at the AAW show over the weekend and told MLW that after this weekend he’s not taking any new dates with them."

Months after he requested it, Impact Wrestling announced in December that they had come to terms on Kross' release.

Scarlett Bordeaux, who is in a relationship with Kross, signed with WWE and reported to the Performance Center after being granted her release from Impact last year.

I just now paid attention to those shirts everyone uses on their signing pics. "Property of..." yeap, it's pretty straight forward.
Top

I always make sure I take pictures the day I buy new cars, so that later on when the car breaks down and pisses me off I can look back on the day I got it and how happy I was.

I feel the same way about these 1st Day At The PC pics... look how excited they are! 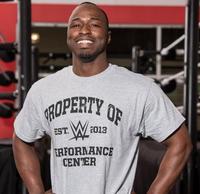 ...like one of those '10 Haunting Photos Taken Moments Before Disaster' videos

...like one of those '10 Haunting Photos Taken Moments Before Disaster' videos

he already looks worried and forced in that pic
Top

I heard that and I honestly find it hard to believe that all of Japan wouldn't take him. Maybe NJPW passed, but if he really wanted to be in Japan, he could have. If Shlak and Dickinson and Hammerstone could find work there, he could too. Dude is 36, he only mostly works for promotions that work for WWE anyway and WWE will hire anyone anyway. He's gonna get ruined, but I hope he at least makes a lot of money.
Top
Post Reply
9 posts • Page 1 of 1