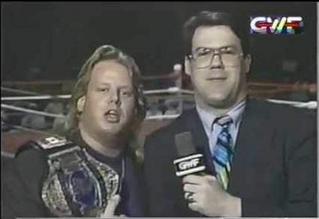 Bruce Prichard (Brother Love) following his first release from WWF
They aquired WCCW's timeslot on ESPN, giving them 5 hours of TV a week (Monday - Friday from 4pm - 5pm), and they made the most of it. Using the smoke and mirrors that The Sportatorium offered, as well as presenting itself in a larger light, the GWF really got you believing that it was a major player.
-Renaming The Sportatorium "The Global Dome"
-Refrencing a (non existant) "Global Television Network"
-Using a two man announce team (face and heel, like WWE)
-Using a third for ringside/backstage interviews (Bonni Blackstone!!!)
-Refrencing OTHER PROMOTIONS (they were the first to do so)! Title histories, departing talent, ariving talent, they were open about it, forcing you to associate them with the bigger guys. They'd even air news segments about what was going on around the sport (not just them!). 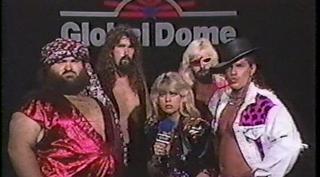 The Cartel
Presentation was everything, but the talent they saw pass through there in their 3 short years was also just as impressive! The Patriot, Buff Bagwell (Handsome Stranger), X-Pac (Lightning Kid), JBL (John Hawk), Bobby Duncum Jr, Harlem Heat (The Ebony Experience), Ahmed Johnson (Moadib)and Jerry Lynn all got their starts here. The promising young talent paired up with more well known guys like Raven (Scott Anthony), Bad News Brown, Cactus Jack, Eddie Gilbert, Butch Reed, One Man Gang and the inclusion of local WCCW favorites Kerry Von Erich, Iceman Parsons, The Freebirds, Chris Adams, and Skandor Akbar - it all made for a show that was really easy to watch.

Lightning Kid (Sean Waltman) vs Jerry Lynn
Way ahead of it's time, GWF's mark was mostly made by it's over the top angles and gimmicks. I mentioned the infamous Bungee Match above, that also saw "Maniac" Mike Davis get launched to the moon and return with a moon rock. One of the announcers got amnesia and thought he was Elvis Presley for a few weeks... pretty tame after living through the Attitude Era, but at the time they were really pushing it. Again, it was so awesome. 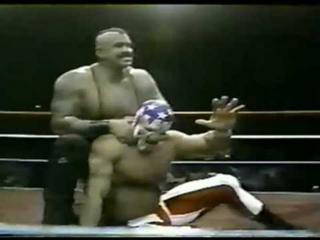 The Patriot vs The Soultaker (The Godfather)
As with all great things, it met it's end far too soon after top talent left due to pay disputes and a lawsuit from WWE ("Global" means the same thing as "World"). WWE owns the library, but I do suggest checking out the content youtube has to offer. It definitely took me for a trip down memory lane!

phpBB [video]
GWF in all it's glory! The video starts with Raven rapping.
Bob-O

Users browsing this forum: No registered users and 14 guests